Until I can get better documentation in place, here is at least a link to the various bits of technology that I created or worked on.

Note: if you find this stuff useful and think “I’d like to buy that guy a cup of coffee!” then consider doing so virtually: My Patreon Page

Lemur
First there is Lemur which is a Graphical User Interface (GUI) library built directly from jMonkeyEngine scene graph components.

Zay-ES
Zay-ES a light-weight Entity-component-system with built-in support for networking and persistence. In my opinion, it is the only “pure” entity system library for Java that I’ve encountered.

SimArboreal
SimArboreal consists of both a stand-alone library and a visual configuration tool for create tree models. The editor allows a developer to create a template that then can be procedurally randomized at runtime to produce a variety of distinct trees. Alternately, one can simply export a j3o model directly from the editor. 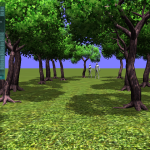 SimFX
A package of useful effects that are built to be easy drop-in components for jMonkeyEngine applications. Currently includes a full atmospheric scattering implementation and light management. SimFX Github Repo

Pager
A general grid-based paging framework for use in managing the threading of infinite terrain. Supports multiple grid sizes and even grid parent/child relationships. Used heavily by the IsoSurface code. Pager Github Repo